It was a gloriously sunny day last week when my mum had the pleasure of visiting the Midland Hotel in Morecambe, Lancashire – a gorgeous art deco hotel on the seafront, overlooking the Lake District fells. In its heyday the Midland Hotel showcased pieces from the most pre-eminent artists and designers of the time, including Eric Ravilious, Eric Gill, Oliver Hill, Dennis Tegetmeier and textile designer extraordinaire, Marion Dorn. 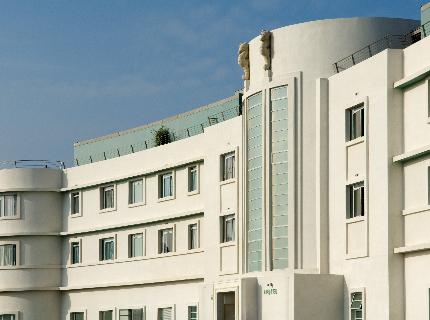 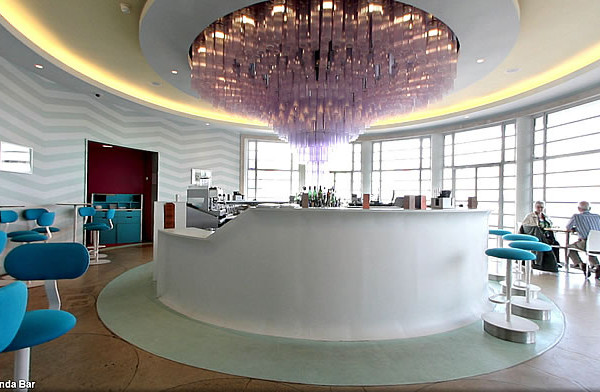 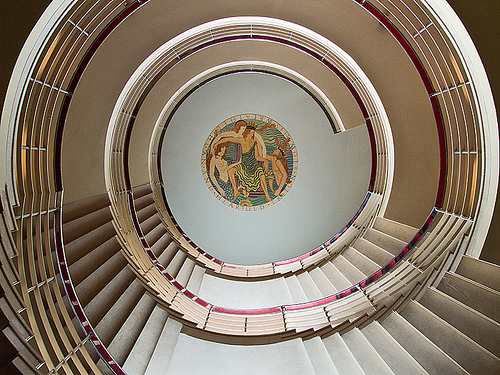 Sadly the Midland Hotel fell into a state of disrepair in the 1990s and many of the treasures within the hotel were put into storage and some even went missing (thankfully they were later recovered). Now the Midland Hotel has been refurbished to its former glory to the tune of around £8 million and we thought we’d find out a little bit about one of the unsung designers whose pieces once graced the striking Midland Hotel… textile designer, Marion Dorn. Marion Dorn in all her glory!

Marion Dorn was an imaginative textile designer born in San Francisco in 1896.  After studying fine art at Stanford University her early career in New York  gained her notice as a designer of batiks.

After a brief time in Paris she settled in London where she was prolific in designing rugs for firstly the Wilton Royal Carpet Factory and, after an exhibition in New Bond Street, for Claridges and The Savoy. Her striking circular rug for the lobby of Claridges is echoed in her beautiful interlocking pattern for the rug in the Midland Hotel. She described the rugs she made for the Midland as the “best rugs I have ever done – for some funny reason” (The Midland Hotel, Morecambe’s White Hope”, Guise & Brook). The rugs in the newly refurbished Midland Hotel are reproductions as the originals did not survive the various fortunes of the hotel. The 1930s were an exciting time for Marion as she was working alongside highly acclaimed artists, designers and architects, Oliver Hill, Eric Gill and Eric Ravilious. After the Midland Hotel commission she and Hill became great friends and he employed and promoted her work wherever possible. During this time she even had commissions to design rugs for the public areas and state rooms of passenger liners Orion and Queen Mary.

Then in 1934 she established her own firm in Bond Street offering her clients a wide range of textile services, including the complete interior of a flat for an actress – rugs, fabrics, wallpaper, furniture, graphics etc… She produced furnishing fabric designs for the company “Edinburgh Weavers” which was known for its avant-garde artist-designed woven textiles.  One of them called “Avis” is a pattern made of tessellating birds in flight and is in the V&A, London. After war broke out in 1939, American nationals were advised to leave England and return home.  Marion struggled to re-establish her reputation in the U.S. but work picked up and she once again gained commissions – one of which was for the Diplomatic Reception Room of the White House in Washington.

She retired to Morocco for health reasons and stayed there for the rest of her life.

An inspirational woman, Marion Dorn’s textile designs made it into some of the most prestigious establishments in the world.